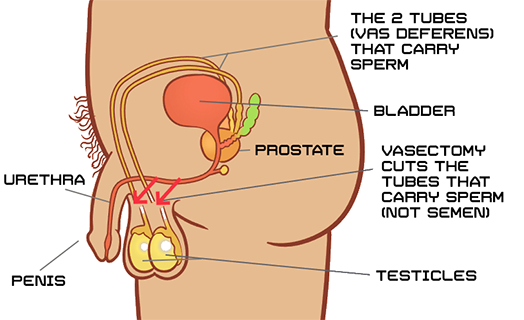 What is a Vasectomy?

A vasectomy is minor 15-30 minute operation, under local anaesthetic performed in an out-patient operating theatre. Vasectomy offers the most effective permanent means of surgical contraception. It has one of the lowest incidences of side effects when compared with other contraceptive methods.

How is a Vasectomy done?

Vasectomy closes the tiny narrow tubes through which the sperm travel. These two tubes are called the vas deferens, and give the vasectomy operation its name.
Vasectomy does not block semen or change the way a man ejaculates during orgasm.

What is a no scalpel Vasectomy?

The open ended no scalpel vasectomy is a variation on the normal vasectomy which is less invasive and is less painful.

A no scalpel vasectomy involves a tiny puncture in the skin of the scrotum made with a pointy haemostat rather than a scalpel. Each vas deferens is withdrawn from the body and looped over the device.
The vas deferens are then divided and separated. The ends closest to the body are sealed using a cautery device.
The vas deferens are then returned into the scrotum.
The puncture hole seals spontaneously and stitching is not necessary.
After the vasectomy procedure there is very little to see externally.

Local anaesthetic to the scrotum and tissues surround the vas deferens is all that is necessary to ensure a painless vasectomy operation.
A relaxing, sedative medication may also be given to help ensure a pleasant experience.

What is the difference between sperm and semen?

Sperm and semen are different things.
Sperm are the tiny “swimmers” that can fertilise a female's eggs and which if successful can make a female pregnant and eventually lead to her producing offspring.
Semen is the milky fluid discharged upon a males ejaculation.
Sperm are just one of the parts of semen and the goal of vasectomy is to stop sperm from reaching the semen and being ejaculated.
These other parts of seminal fluid (semen) are designed to help the sperm by assisting with its swimming ability, lubrication, and by reducing the resistance of the egg to accepting the sperm.
Follow the link for a funny but detailed explanation of the role of the different organs of the male reproductive system including the epididymis (stores sperm), seminal vesicles (makes 70% of semen), prostate (makes 25% of semen) and bulbourethral glands.

How does a Vasectomy prevent pregnancy?

Sperm travelling through the tubes will normally enter a mans semen. Cutting the tubes prevents the sperm from reaching the semen. When there are no sperm in the semen then the seminal discharge during sexual relations cannot cause pregnancy.

What happens to the Sperm?

They die, dissolve and are absorbed by the body, a process which occurs with all cells - for example 5 hundred million red blood cells die every day.

No the penis and testicles are not affected. Semen and male hormones are produced as usual.
There are many studies on men, both before and after vasectomy, which have demonstrated that no hormonal changes occur after vasectomy.

Does Vasectomy affect the enjoyment of sex or a man's ability to reach orgasm?

There is no change. A man will typically enjoy sex as much as before and will continue to have erections, orgasm and ejaculation of semen but the discharge of semen after a vasectomy is sperm free.
The removal of the fear of accidental pregnancy may add to a greater sense of pleasure.

Does the operation hurt?

With local anaesthetic there is usually no pain. In common with other minor surgery some discomfort or tenderness may be felt after a Vasectomy. This can be relieved by taking an analgesic such as Paracetomol.

Does the operation require time off work?

Most men can return to their jobs after 2 to 3 days. BUT should avoid heavy work or sport for 7 to 10 days.

What are the risks of a vasectomy operation?

All surgery involves some risk. The most frequent complications are local swelling, bleeding and infection (about 1 in 100). Serious bruising, pain or other complications (less than 1 in 1,000).

How soon after a vasectomy can a man have sex?

Men can have sex around seven days post vasectomy (and once any discomfort has settled), but they must continue to use contraception until advised that their semen contains no sperm.

Is there any chance of pregnancy after a vasectomy?

Active sperm may remain in the vas (tube) ahead of the cut and come out in the semen for some time after the operation. This varies with each man, but might take up to several months. So a contraceptive method must still be used until the semen is tested and the man told his discharge contains no sperm. In very rare instances a tube may grow back together, letting sperm pass through, or one side may have more than one tube.

Can fertility be restored at a later time?

Some success has been recorded in reconnecting the vas deferens tubes surgically. But no one should count on reversing a vasectomy operation. Couples should use vasectomy only when they are certain they do not want more children. Medicare does not have a refund for vasectomy reversals either vasovasostomy or vasoepididymostomy.

What preparation do I need to perform before the Vasectomy?

How do men who have had a vasectomy feel about it afterwards?

The great majority are happy about it and recommend it to their friends. A few men express reservations or regret. Usually these are men that have had complications or insufficient discussion beforehand or have expected it to solve a previous problem, or were pushed into having the vasectomy.

How is a vasectomy arranged?

Is the cost of a vasectomy refundable from Medicare?